Taking a basic StackStorm deployment and rolling it up in Ansible

posted in DevOps, StackStorm, Automation on January 11, 2021 by Dylan Lundquist

This is the second part in a StackStorm tutorial series:

To complete this tutorial you will need:

If you prefer skipping ahead to the final solution, the code created in this tutorial is on Github.

In the last article, we: deployed a StackStorm (ST2) instance, created our first pack, integrated it with an available community pack, and used them to demonstrate several basic concepts achieving basic Continuous Integration (CI) for our custom pack in the process.

I hope that article proved to pique your interest, and have been able take that information to spin up some custom actions of your own alongside exploring some of the features StackStorm has on offer.

However, as we look ahead and our deployment grows in our environment, becoming more integral to day to day operations, we look at being able to replicate it. Either to meet expanding resource growth needs, advanced development workflows, or for resiliency and disaster recovery.

Individually managing the installs using the one-line method or other manual installs is not sustainable for long periods of time so we need some other way of deploying what we have created so far.

Ansible is a perfect tool for taking what we have already in our pack, config file, and setup tasks and abstracting that into creating a repeatable playbook. It just so happens StackStorm has playbooks available that are easily modified to suit our needs.

The available StackStorm Ansible playbooks are modular which makes it easy for us to incorporate our own changes without modifying the code-base at large. In this section we'll simply create our own Ansible role to handle the few configuration steps that we previously had to manually perform.

Once we have our new Ansible role, instead of using the one-line install, we'll simply run our modified Ansible playbook file and include our role with it. Like magic our instance will be deployed with our pack, the git pack dependency, our github_token in the encrypted data store, and our sensors monitoring for pack changes.

We'll start by simply cloning the ansible-st2 GitHub repo which contains the playbooks and roles we will be using as our basis, after which we will drop in our hand-crafted role.

Now let's get to it!

Our Ansible Role will be quite simple, as we only need to complete a couple actions to configure the git pack. The ansible-st2 playbooks have functionalities that allow us to specify packs to install when we run the playbook which gets us part way there, however we still need to create a Role to complete the git pack setup.

We define our repositories in our Role's vars and will use this repository list to live build our git pack config as the playbook runs. An alternate method would be to store the config file in our Role and simply do a file-copy, but that is more rigid in its implementation and makes is a bit more awkward to reference. Using the above method gives us more centralized flexibility in controlling our role schema as it develops and grows. This flexibility is the same reason for parameterizing our github_username, not all of our pack repositories may use the same access and this allows us to set them individually.
We need to escape our {{ st2kv.system.github_token | decrypt_kv }} value as Ansible will try to process these Jinja tags, same as StackStorm. Ansible has no knowledge of our ST2 key-value store nor the decrypt_kv function, if we do not escape these tags, our playbook will error out when Ansible processes them. We could escape our {} characters individually, however using the built in {% raw/endraw %} Jinja block tags is a bit more straightforward and easier to read.
You'll also notice a second repo in our list, this is to demonstrate scaling our Continuous Integration with multiple packs. As packs develop and gain more actions it makes sense to break them apart into related products (Jira, EWC, etc.) and our playbook should support this.
Adding a public repo to our list for tracking is even easier, should we want a public repo to be installed- we simply just pop the repo's public GitHub url onto the list:

Our playbook will be completing a few main tasks:

The handlers referenced in our action. These simply act as basic commands aliases for running within our Role. These could have been hard coded into our tasks/main.yml file as individual actions, but Ansible and ST2's strengths are their flexibility. So by using the handlers, we set ourselves up to more readily being able to reuse commands in other workflows in the future.

With our Role in place nestled amongst the other Roles within the ansible-st2playbook repo that we cloned, all we need to do is modify the main /stackstorm.yml file in the root of playbook repo to let it know about our newly created role, StackStorm.git (modified portion appended):
We simply follow the standard set by the fine folks over on the StackStorm team, and append our git role to the list to be applied to our server.
Now all we have to do is run our playbook while inside our modified ansible-st2 repo, and we should have a one-line repeatable deployment.
We modify the playbook command slightly to include our pack install, and at this time pass in our github_token variable to be used within our StackStorm.git role:
We only target the localhost for our Ansible inventory (-i) in this demo but the same power remains here when it comes to passing in a file containing a list of remote hosts to target.
We don't need to pass in our st2_auth_username/password here, but to maintain parity with the previous guide, I've re-used the defaults. If we don't set a password the playbook will use the default set in StackStorm.st2/defaults/main.yml. A full list of options that can be passed in can be seen in the git repo variables list.
As the playbook runs we will see each component of StackStorm get deployed, and our packs installed along with the base st2 pack:

If we want to block our token from appearing in this pack install log at runtime, we can append the no_log: yes Ansible tag, however this would mean modifying the related task provided in the base StackStorm.st2 role. There's nothing inherently wrong with modifying the st2 role to suit your own needs, but for demonstration in this article I wanted to leave the ansible-st2 repo as provided.
Another option might be to log our token first in an Ansible vault, however by passing in our values only at playbook execution we ensure that they are not saved within the codebase or git repo in any way. If we want to update ourgithub_token in the key value store at some point in the future without running the playbook, we can do that directly using the same command we used to set the key in the first article.
Similarly for when it runs our StackStorm.git role, we see our tasks complete
And when we look at our instance UI we see our packs and their dependencies were all installed. My second my_st2_jira pack requires jira so naturally it appears here: 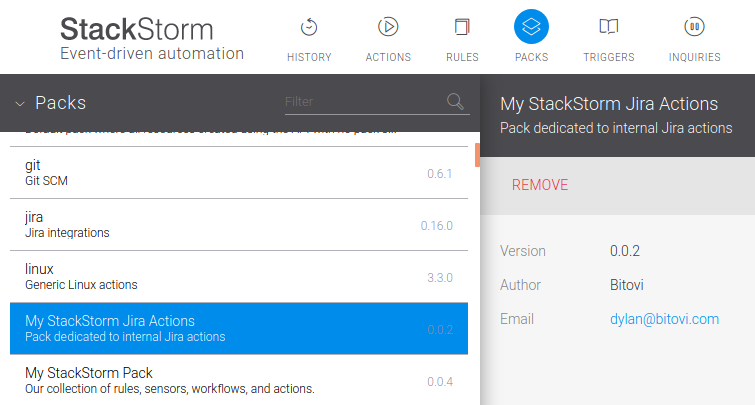 As well as that we have two initial updates from our git sensor as it clones the repo's current state:

If we go and test each of our packs to see if our git pack was configured to update on repo changes as it should be: 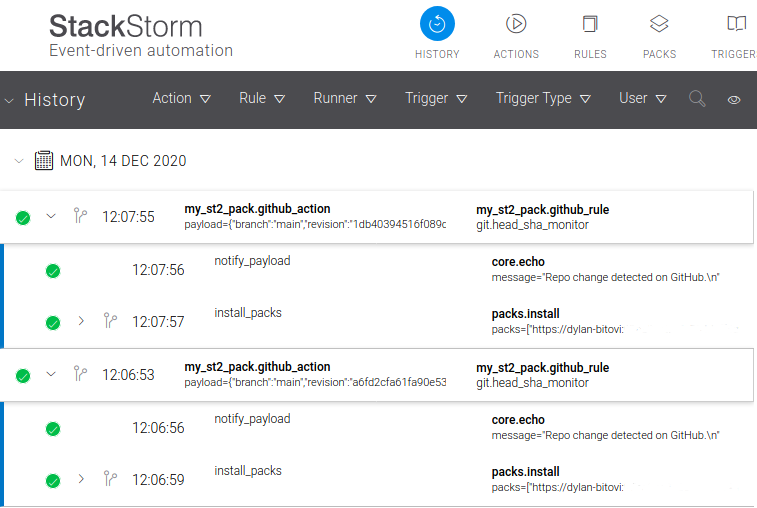 What exactly have we accomplished here? It can be a bit hard to see what benefit rolling this all together under an Ansible abstraction layer brings us when the example is such a small deployment.
Your thinking in that case, would be correct. For small deployments, this may be unnecessary... At least for a time. However, if a software package is regularly used over a long period, it stands to reason that its adoption rate in an environment increases with that time; unless built for a single purpose, which StackStorm is certainly capable of more.
Moving our configuration into an Ansible playbook drives us closer to advanced deployment concepts and infrastructure as code ideals. These concepts while somewhat intangible at first, gain great weight when deploying at scale. What would have been a company Confluence guide on how to setup StackStorm with multiple steps, configuration files, pictures and references, is now a two-step process which requires no knowledge of the configuration at large:

Rightly, in a business organization there would still be some documentation detailing what we've accomplished here. But the internal barrier to entry has been greatly reduced should we want to deploy this at another business unit or with another team.

Using the Ansible playbooks also allows us to look closer into the individual components and features in a way that the one-line install cannot without becoming unwieldy. We now have the power to modify each StackStorm service setup so it can be correctly integrated with whatever unique environment traits your configuration may have and require. A custom st2.conf can be passed in directly if it is so needed.

How can we take this further? I made a sly reference to it earlier in this article with the StackStorm exchange AWS package. Well, what if I told you we can abstract this even further to cover the creation of the Linux server and environment that our instance runs on?

Next stop, the Cloud!

If you have further questions or suggestions, please reach out and become new members in the StackStorm Community Slack, or drop us a message at Bitovi!

We collaborate with development teams on deployment automation, resiliency, observability, and infrastructure migration and management. We’re happy to assist you at any time in your DevOps automation journey!

Click here to get a free consultation on how to tackle your biggest StackStorm problems.

How to Deploy Storybook to GitHub Pages with GitHub...

If you’re using GitHub Actions as your Pipeline Runner, Bitovi has created a new GitHub action that makes publishing your Storybook to GitHub Pages a snap....