What is Continuous Integration? This post from our Director of DevOps Consulting explains the automated process that ensures code is deliverable.

posted in DevOps on December 1, 2022 by Mick McGrath

Continuous Integration (CI) automations are a vital part of DevOps and Cloud Engineering that simplify software delivery by helping ensure all code deployed to a hosted environment is bug-free and secure.

Why is Continuous Integration Needed?

Continuous Integration standardizes the build, test, and publish processes for any number of developers, which helps to lower discrepancies across developer and hosted environments. Each developer must take fewer steps to deliver software due to CI automation.

For the Continuous Delivery process to be truly viable, a pattern of “build once, deploy anywhere” should be adopted. This pattern means that artifacts published from code changes can be confidently deployed in any environment, including Production, because they have been thoroughly tested and audited.

What is Continuous Integration?

Continuous Integration is the automated process that ensures that application code is deliverable to a hosted environment quickly and securely. The intention is to take the changed source and create a secure, deployable artifact.

The core functions of Continuous Integration are: Build, Test, and Publish. 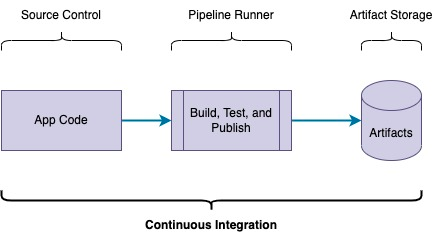 Building and Testing can often occur in parallel, depending on the test type, and it’s common to run some tests before a build and others afterward. Publishing, however, needs to happen after all tests and builds have been completed satisfactorily.

Applications or services often need to run a build process to produce a deployable artifact. Build artifacts will vary depending on service type or programming language. Some build artifacts include:

The build process should run any time changes in code need to be deployed to an environment.

Automated tests are used to ensure that code is bug-free. They’re arguably the most critical component of Continuous Delivery because it’s challenging to know if a deployment will break an environment if the code being deployed has not been rigorously tested.

Testing can come in many forms. Some examples of tests include:

Which tests are implemented and executed and the definitions of many tests will vary by company, team, and project. There is often an overlap of functionality between multiple test types. Some test types, such as end-to-end tests, are executed not at Continuous Integration time but after a deployment. While other test types, such as security checks, can happen at Continuous Integration time and post-deployment.

Regardless of the definitions, it is important to test things like:

If you’re not prioritizing tests, you should absolutely start, especially if you’re moving towards Continuous Delivery for your software.

Once code changes have been built and thoroughly tested, the build artifacts are ready to be stored for deployment. The publishing process takes built artifacts and hosts them in a location that is accessible to the deployment process or deployed environments.

Some all-in-one artifact repositories include:

JFrog Artifactory and Sonatype Nexus Repository are stand-alone artifact repositories that support most types of artifacts your team might need to deploy. Both JFrog and Nexus Repository have free Open Source Software versions if you want to host one of the solutions yourself and have the means to manage it. JFrog has a limited free tier, and both JFrog and Nexus Repository have tiered paid versions for enhanced features and should be considered if your team(s) have many types of artifacts to publish or want to utilize features such as vulnerability scanning.

GitHub Packages, GitLab Packages, and Azure DevOps Artifacts each support a subset of artifact types that JFrog Artifactory or Sonatype Nexus does. Still, they allow artifacts to be stored close to or more tightly integrated with the code repositories without needing to manage an external service. Software Suite packages should be considered if you’re already using one of the Source Control Management (SCM) systems and your artifact types are supported.

Artifact versioning plays a prominent role in the publication process. You and your team must decide on a versioning approach that works well for your use case(s). A typical pattern for versioning is to generate a ‘latest’ deployable artifact for every commit to the base branch of a service repository and generate a versioned artifact using a version naming pattern (such as Semantic Versioning or Calendar Versioning) that corresponds to a release in the repository. The ‘latest’ artifact can easily be automatically deployed to a development environment so that developers always see the latest changes in their application or service in a hosted environment along with other relevant services. When the development environment is behaving as expected, a repository release with a versioned tag is created, generating a corresponding artifact that can be deployed to all other environments.

Aside from the ‘latest’ artifact, there are a couple of other artifact versioning approaches which do not follow the “build once, deploy anywhere” pattern: Pull/Merge Request Environments and Hotfix artifacts.

In a Pull/Merge Request Environment, a temporary artifact is generated and deployed to a hosted environment to test changes against other services prior to a merge to the repository’s base branch. Be mindful of how your PR/MR Environments are managed, as they can easily incur a high infrastructure cost.

Hotfix artifacts allow bypassing lower environments to release a bug fix without the need to run through the entire verification process of lower environments. A situation where you might consider hotfix artifacts is if you have a time-based deployment schedule and a need to deploy a critical fix as soon as possible outside of the typical schedule. Hotfix artifacts should generally be discouraged, and their use should be accompanied by rigorous testing in whichever environment they’re deployed into to help ensure compatibility with other hosted services.

Want an in-depth look at Versioning? Check out this post.

How does Continuous Integration Work?

Continuous Integration pipelines are typically defined in Pipeline Runner configuration. Essentially, the steps that you would normally run manually on your local machine to run tests and build artifacts are defined in a pipeline configuration file and checked into a repository along with your code. Part of the pipeline configuration should be to define triggers to run the Continuous Integration automation based on your branch and versioning logic (e.g. run tests on the creation of or commits to a Pull/Merge request). With tests and triggers defined, check in code that meets the trigger conditions, and your Continuous Integration automations will be executed by a Pipeline Runner.

What options are available for Continuous Integration?

How much does Continuous Integration cost?

How much does Continuous Integration save?

Another valuable question is: How much does Continuous Integration save?

Similarly to Continuous Integration cost, determining how much you will save is not simple, or even quantifiable.

Some quantifiable aspects of Continuous Integration savings are:

Some aspects of Continuous Integration savings that is much harder to quantify are:

Most quantitative saving with Continuous Integration comes from shorter developer iteration times because developers will spend less time manually running tests on their local machine; Instead, they can just change their code and check it in. Developer iteration time can be calculated by measuring the frequency of commits or merges into the base branch of a repository.

It should be noted that Pipeline Runners do have an additional startup time which introduces some latency compared to local tests and builds. To mitigate Pipeline Runner startup latency, developers should be encouraged to have multiple work streams so that they can switch contexts to a second task while the Continuous Integration pipelines are running for the first task.

Continuous Integration encourages developers to write tests and keep them up-to-date. When developers maintain tests that are then automated by a pipeline, fewer errors will make it into the base branch where deployable artifacts are created. You can calculate service errors by capturing logs and metrics from services as well as by measuring bug tickets submitted by users or QA teams.

Clean, well-written code is easier to read for other developers or even developers revisiting their own code long after it was written. Code smell tools, tools that help developers identify problems in code, and linters, tools that analyze the structure of code to ensure consistency, are a couple of ways to ensure that code is clean and well-written.

How do I get started with Continuous Integration?

Here’s a quick high-level example of a Continuous Integration pipeline with GitHub Actions which lints the code, tests the code, builds the package and publishes an artifact:

Note that the build in this example is wrapped in the npm publish . command, and versioning logic is baked into NPM and its understand of a JavaScript library’s package.json configuration file.

For a hands-on getting started guide, GitHub also provides a skills template for Continuous Integration where you will learn how to create a workflow that runs tests and produces test reports: https://github.com/skills/continuous-integration.

You should now have a decent idea about the role Continuous Integration plays in automated software delivery.

Regardless of where you are on your DevOps maturity journey, you should consider leveraging the expertise of 3rd parties or vendors, like Bitovi DevOps Consulting. You can easily bring in DevOps and operations expertise to your projects to bootstrap your infrastructure, automations, DevOps culture, and maturity plan.

How to Deploy Storybook to GitHub Pages with GitHub...

If you’re using GitHub Actions as your Pipeline Runner, Bitovi has created a new GitHub action that makes publishing your Storybook to GitHub Pages a snap....