Using yeoman to make it easy to get started with BitOps.

This is part 2 of a BitOps tutorial series:

An operations repo is a repository that defines the intended state of your cloud infrastructure. It follows an opinionated structure to allow BitOps to traverse the repo.

To introduce users to operations repositories, we’ve created a yeoman package that makes it easy to get started with BitOps. Just run

Run yo @bitovi/bitops and Yeoman will create an operations repo for you based on your inputs.

The generator will ask you for an environment name and what deployment tools you want to use.

We recommend Terraform and/or Ansible for your first time.

The yo generated README.md will contain a docker run command for running BitOps against your new operations repo. Cool!

After creating an operations repo, running BitOps with the docker run command above will scan the operations repo’s backend-test directory for supported deployment tools and run those tools using executables bundled in the image.

Already have an operations repo/IAC?

If you already have an operations repository or a repository containing infrastructure as code, you can still use yo @bitovi/bitops to help.

Suppose you have a repository containing a JS application in an app/ directory and Terraform code in an infrastructure/ directory.

From the root of your application repository run

Running yo @bitovi/bitops and moving your existing infrastructure code into the generated infrastructure/terraform/ directory will give you a BitOps compliant operations repository structure! 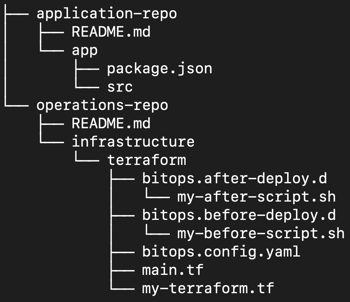 The pattern of creating a new operations repository environment with yo @bitovi/bitops, moving existing infrastructure code into it, and updating pipelines can be done regardless of your current state.

By running the command yo @bitovi/bitops, you’ve set up an operations repo and then deployed its contents to the cloud without installing any other tools.

Want to learn more about using BitOps? Check out our github, our official docs, or come hang out with us on Slack #bitops channel! We’re happy to assist you at any time in your DevOps automation journey!