posted in Open Source on September 30, 2016 by The Bitovi Team

Having experience with these compromises in the past, the DoneJS team set out to solve the issue in a low-level way, and can-zone was born.

As a brief refresher, Zones (implemented in can-zone) are a technology that tap into the JavaScript event loop so that you can define behavior that happens before and after asynchronous code is run.

In a previous article we saw how we could use this abstraction to create a performance monitoring plugin to time function calls. If you haven't yet, you might want to read the introduction to can-zone. It introduced the ideas behind Zones and how they are generally useful. In this article we'll go over one general problem that Zones can help to solve: server-side rendering. In outline:

Why Server-Side Rendering is Important

For most classes of applications, server-side rendering can improve the perceived performance of your application. Amazon found that for every 100ms of latency it cost them 1% of sales.

One of the primary reasons we write single-page applications is to decrease the time it takes to transition from one section of the app to the next. The same reasoning applies to the initial page load; the quicker you can get content to your users the more likely they are to stay on your site. Even if your application is not yet warmed up (as JavaScript and CSS are fetched) the user is still able to see the content and start making choices about where they will go next.

To work around the difficulties of rendering a SPA, there are a couple of existing solutions.

A headless browser, like PhantomJS, is a browser with full rendering capabilities and a JavaScript engine, but without the “head” of the browser; the part that paints to the screen. Instead they provide a JavaScript API that allows you to control the browser in the same way we normally do from the GUI; loading a single web page. PhantomJS has been used for server-side rendering because it gives you an environment that is identical to the web browser your application was written for. Most implementations:

As the diagram below shows, using a delay is wasteful as rendering often completes way before the timeout occurs. 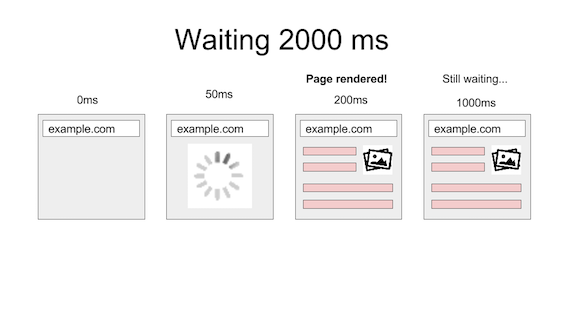 While effective, the headless browser solution hasn't stuck because it:

An example is taken from the canonical Redux SSR example:

Here fetchCounter performs an API request before the Redux store is ever created. This sort of duplicate logic for every route in your application will quickly add up. Using Zones would allow you to move the asynchronous behavior into a reducer, which would be shared code between the client and server.

Virtual DOM frameworks do not provide a solution to the async problem but rather leave it up to you. Although no "winner" technique has emerged yet, most solutions revolve around strict application conventions like moving all application logic outside of components and into the state container (usually a Flux implementation like redux). These have drawbacks such as:

The root of the problem with SSR, and why most frameworks are struggling to integrate it, is that client-side JavaScript is oriented towards the browser, which is single user, and servers are conversely multi user. For the sake of maintainability writing your code browser-first is extremely important.

This is where Zones come in. They bridge the browser (single user) and server (multi user) environments by providing a common context for all asynchronous code, effectively making it single user. By context I mean that asynchronous code is contained within the Zone so that when you create a new XHR request, for example, it's callback will occur within that same zone.

Zones as a state container

By tracking asynchronous tasks triggered within a function call (the function provided to Zone.prototype.run) a Zone provides context within all code that is kicked off by that function. When writing a plugin, you can add to a Zone's data by providing a function as the container for your plugin:

When the Zone's Promise resolves the data is returned as the Promise value:

This allows you to contain state within a Zone. An example of state that you might want to keep is a document that you modified during rendering, or if using a Flux layer like Redux it would be the Flux store that was asynchronously updated.

A world of multiple zones

So far in all of our examples there has only been a single Zone used. The power of Zones as a state container comes into view when there are multiple Zones at play.

In this example there are two Zones, each running its own asynchronous code. Inside of the Zone's run function Zone.current always refers to that Zone. This is where the Zone acting as a common context comes into play. All code executed within a Zone:

This is what happens for each request, but remember that on the server requests are overlapping. Using Zones allows us to isolate each request into a common context.

Now that you know the benefits of Zones to help with the request-isolation problem in server-side rendering you'll want to try it out for yourself. No matter what type of framework you are using, Zones can be used with minimal (if any) changes to your app's core code. Check out our two example apps to get you started: