Simplify your Unit Tests with Dependency Injection for JavaScript Modules

Use Dependency Injection to simplify your unit tests with the JavaScript module format you're already using and without changing your code.

posted in Development on March 9, 2016 by Kevin Phillips

Simplify your Unit Tests with Dependency Injection for JavaScript Modules

Note: Come join us for a live training on Dependency Injection with StealJS on Wednesday, March 16, 2016 at 12:30 PM CST.

Writing small modules with good unit tests greatly increases the maintainability of your code. However, it can be difficult to test a module without first understanding how its dependencies work. Dependency Injection (DI) allows you to isolate your tests to exactly what you’re trying to test.

What is Dependency Injection?

Dependency injection is a Computer Science design principle that has been around a long time. There are lots of articles (here are a few) that go in depth on this topic, but I’ll use this simple definition:

Dependency Injection - replacing the code that will be loaded when a JavaScript module is imported.

The most useful way to use DI in JavaScript is to simplify unit testing. To better understand this, we'll go over the simple example shown in the GIF above.

In the next sections, we'll show how to unit test them, with and without using DI.

If you want to test navigation.greeting without Dependency Injection, you need user.name to return a value. One way to do this is to intercept the request being made to the server and return a mocked AJAX response with the data needed for your test case.

With this approach, you’re testing more than just the greeting function: 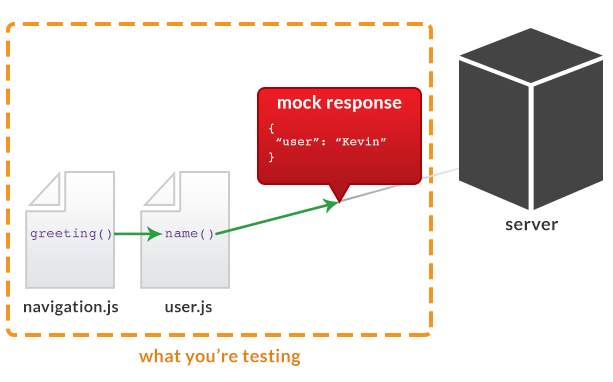 In order to set this up you also have to know implementation details about the user module.

If the user module changes, you might have to modify your test, even if the changes don’t affect the navigation module. Consider the following scenarios:

What happens if the server’s response changes?

What happens if the user module starts caching its data in localStorage?

The paradigm of unit testing is broken. Unit testing should be isolating and testing a single module, but in practice, this unit test is dependent on many modules that we’re not trying to test.

The tight coupling of the navigation module’s tests to the implementation of the user module leads to brittle tests and lots of frustration - if you don’t just give up on testing the module altogether.

Testing the navigation module becomes much easier when using dependency injection because you can inject a version of the user module that does exactly what you need for your navigation module’s tests: 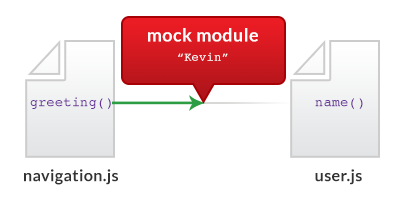 Now if the implementation of user.name changes, it won’t affect your tests at all.

You’ll notice a few things in this code:

This simple example shows how Dependency Injection can isolate your tests to exactly the module you’re testing and how simple it is to use DI with StealJS and steal-clone. If you want to start simplifying your tests and you’re already using StealJS, take a look at the docs for steal-clone and start using it today. If you’re not using StealJS, take a look at its homepage and docs to get started.

There has been a continual drive towards remote work in the tech industry - commutes are awful, interruptions suck, and open office layouts are the actual...

Working remote sounds glamorous, but it takes more work and discipline than teams may realize.