July 22, 2012 at DePaul University, Bitovi and the American Stroke Association are running a 3-on-3 charity basketball tournament - Hoops for Heart.

The American Stroke Association is part of the American Heart Association. In 2010, stroke and heart disease killed over 720,000 Americans, making them the leading cause of death in America (take that cancer).

I had a stroke when I was 26. My medical bills totaled over 100k. My uncle recently died of heart attack. Everyone, young and old, healthy and unhealthy, can be affected by these diseases. Together, we hope to turn this into a yearly event and play a small part in making things better. We hope you can join us.

This article covers the logistics of the tournament and my personal story with stroke.

What: A 3v3 basketball tournament with teams of 4. 10 teams will play (40 people). Each team will play 4, 15 minute games against other teams (round robin). The 4 teams with the worst record will play a single round tournment leaving the 8 best teams. Those teams will advance to the single elimination playoffs.

Cost: A $50 dollar donation to the American Heart Association. Check or cash.

Where: DePaul University Gym. I will post directions shortly.

Who: You! Players of all skill levels, ages, genders, and other defining characteristics are welcome.

Teams: Teams will be comprised of 4 players. The composition of players on each team will chosen to keep teams as fair as possible. You can request to play with one other person. However, if you are both top players, you will likely not play together.

Stats: We will record each game and provide a detailed analysis of your play (for each game and over all). For example, here's my over all from last year:

We'll send out play-by-plays and videos of the games over the following months so you can reminisce. Here's a sample from last year's Polysystems. Brian and I are down by 1 in the championship game, with 30 seconds left:

My Personal Story with Stroke

The following is an account of my stroke, figuring out what was wrong with me, and how I got 'fixed'.

In 2008, Brian and I were ending our 2-year experiment living dirt cheap in the suburbs trying to start a business. We had just landed two awesome clients - Zend and Shortel. I temporarily moved back home with the parents for a month while I, and my future roommates, prepared for my return to Chicago.

About a week after I turned 26, I woke up early one day, played a hard game of basketball (which of course has nothing to do what happened), went to work, and took a shower.

While in the shower, with my head full of shampoo, I felt an overwhelming sense of dread and anxiety. My life was a mess. I hated everything and everyone.

I've never had a panic attack before. If this is what they feel like, they suck. Yet even in my despair, I thought, "I never feel like this. Something's going on."

I didn't have much time to reflect before the surface of the tub became extra slippery. So slippery that I could barely stand up. "Time to get help", I thought.

Shakily, I rinsed off my hair and attempted to get out of the tub. This meant balancing on one leg. I crashed into the wall, saving myself with my right arm.

I knew my Mom was home downstairs. But the "kid's" bedroom was divided into two rooms separated by a door. One with the tub and toilet, another with the sinks. This means I had to open 2 doors before I could be in a position where my Mom would hear me. Complicating matters slightly, I was completely naked.

By putting a shoulder against the wall and using my right hand, I managed to grab a towel and open the first door. I worked my way to the second door by shifting my weight between my right hand, left shoulder, and right foot. My left side was worthless except as dead weight.

After about 30 seconds, I worked my way to the second door, which was 6 feet from the first, and opened it. Before calling out to my Mom, for modesty's sake, I decided to try the towel. But, no matter how hard I tried, I could not tie it around me.

This will hopefully be a singularly unique moment in my life - debating if I should:

After about 5 seconds, I gave up, put my shoulder against the doorframe and yelled:

But, it didn't come out like "Mom". Instead it sounded like Eric Cartman's "Maoouuummm." My speech was slurred.

She was on the phone. Annoyed at her 26-year-old calling out across floors, she curtly said "What!". My response:

At this point she heard the panic in my voice and ran up the stairs like a mother cheetah. Seeing me on the floor, naked, she didn't bat an eye, but calmly asked, "What's wrong?".

I told her I could not lift my arms. She ran into another room and called 911.

Figuring out what went wrong

The EMTs arrived 5 minutes later and took me to the hospital. Slightly before they returned, a large amount of motor control came back. My speach was still slurry, but only noticeable to people who knew me. I was drooling a little.

The hospital, being stupid, discharged me with hypoglycemia. The miss-diagnosis was likely due to my youth (and them being stupid).

I wanted an MRI, and after a week dealing with insurance companies, I sat in one of those amazing stress machines, and the results looked like: 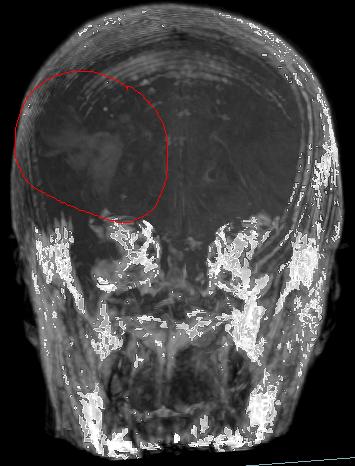 I had a pretty good sized stroke in the right parietal lobe. My doctor told me to immediately go to the hospital if I was feeling strange.

I was feeling pretty strange because I was ... well ... 26 and just had a stroke, so I went to the hospital. They found that I had:

Factor V Leiden - a hyper coagulating blood disorder. My blood starts clotting and doesn't like to stop. Yes, I am like wolverine.

Patent Foreman Ovale (PFO) - a small hole in the heart between two chambers. It can lead to stroke because instead of a clot going to the lungs and being filtered, it skips the lungs by passing between the two chambers allowing it to reach the brain.

Combined, it meant I was more likely to form clots and have them go to my brain. Great.

It took them eight days to figure this out. Unfortunately, these 8 days in the hospital racked up 90k of medical expenses. And, I learned that my insurance was going to investigate these claims because I had only been on the insurance for 7 months.

My hospital's doctors put me on Warfarin, an anit-coagulant, and recommend I stay on it for life! This would mean a greatly diminished life. No skiing, basketball, etc. And, I'd have to go to a clinic every other week to get my blood tested. Checkout this awesome TED video where Tal Goesworthy hints at how bad it is.

But as previously noted, my hospital's doctors were not world class. So I spent the next few months hunting down the best doctors and the best research.

All of my top-docs recommended either aspirin or having my PFO closed, but going off anit-coagulants. I decided to do both, starting with my PFO closure after a year on Warfarin.

I was awake the whole time!

I left home that night. We live in amazing times. Where someone can have heart surgery, while awake, and go home in the same day. Crazy.

A year after the surgery, stopped taking Warfarin and started taking aspirin.

I'm extremely fortunate. I have no lasting effects of the stroke. My insurance found nothing and eventually paid their very large share of my total medical expenses (about 150k). I only have to take an aspirin a day.

In the end, it was 2 year long period of uncertainty, headaches, and paying a lot of bills.

But it could have been much worse and is for other people. I know people who can't walk or hold their children. If I didn't have insurance, there would be no Bitovi.

This is why we are doing this tournament. Every little bit counts. We can prevent heart attacks and strokes from happening with healthy lifestyles, like playing basketball. We can reduce their effects by being informed and getting proper medical care quickly. By donating, we can fund new research that can make better recoveries.

Meet Phil Henning! Phil is a Site Reliability Engineer who works with clients to identify their DevOps and infrastructure needs and helps build robust...

Hello potential Bitovian! I'm writing this blog post to organize my thoughts on working at Bitovi. I'm going to attempt to: Answer the most common questions I...