Learn how to generate an Angular application with it's command line interface (CLI).

How to Use This Guide

This guide will walk you through building an application in Angular. Each page of the guide is based on building a new feature, and may have multiple "problems" to solve. Each problem will be explained and include requirements and any set-up steps needed. Most problems will also include unit tests to update to verify the solution has been implemented correctly. The ✏️ icon will be used to indicate when commands need to be run or when files need to be updated. If you have any issues or suggestions as you move through this training, we'd love you to submit a GitHub issue for it! 💖

In this part, we will:

We want to create a new Angular application and update it to say Place My Order App: Coming Soon! in an <h1> element. 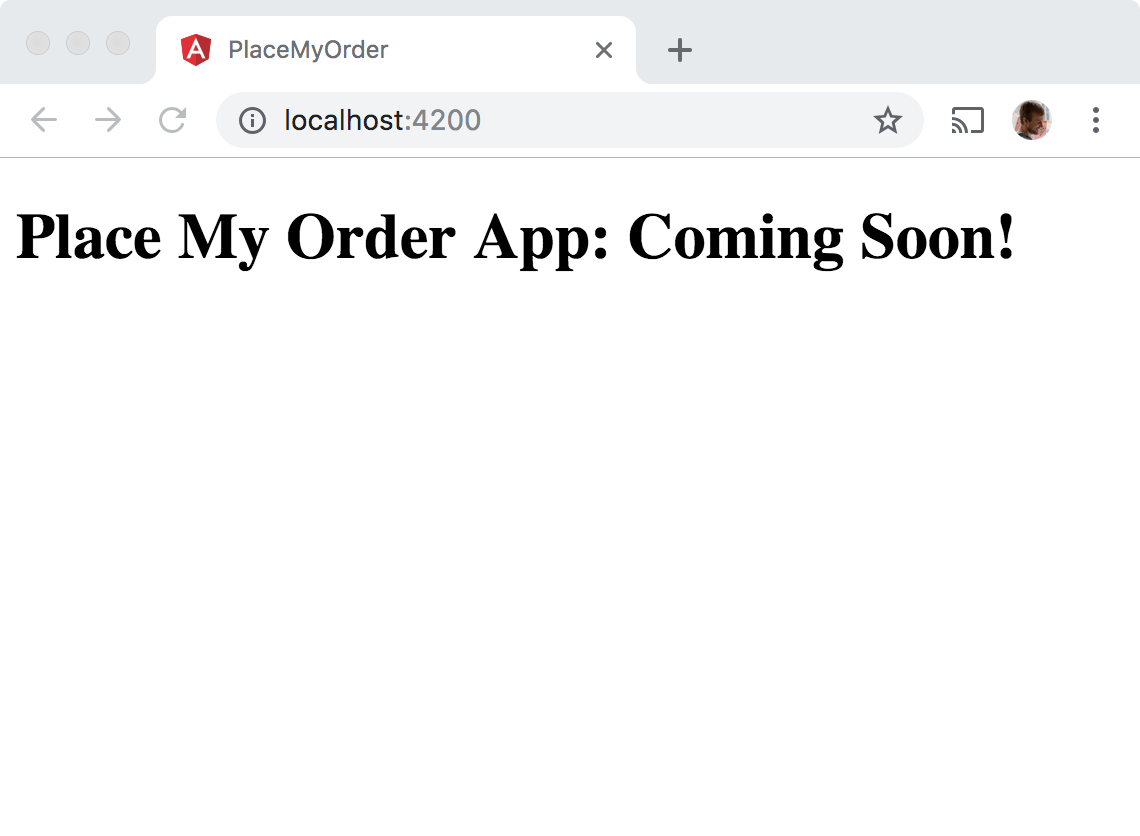 What You Need to Know

To complete this exercise, you are going to want:

If you're looking for a code editor (aka IDE) to improve your Angular development - VS Code is widely used by the community but editors like Atom and Webstorm are fine as well. Plugins can go a long way in aiding the development process.

VS Code is Microsoft's modern take on an IDE for app development (P.S. TypeScript is a Microsoft Open Source project). VS Code has built in TypeScript support for syntax highlighting, IntelliSense code completion, and linting. 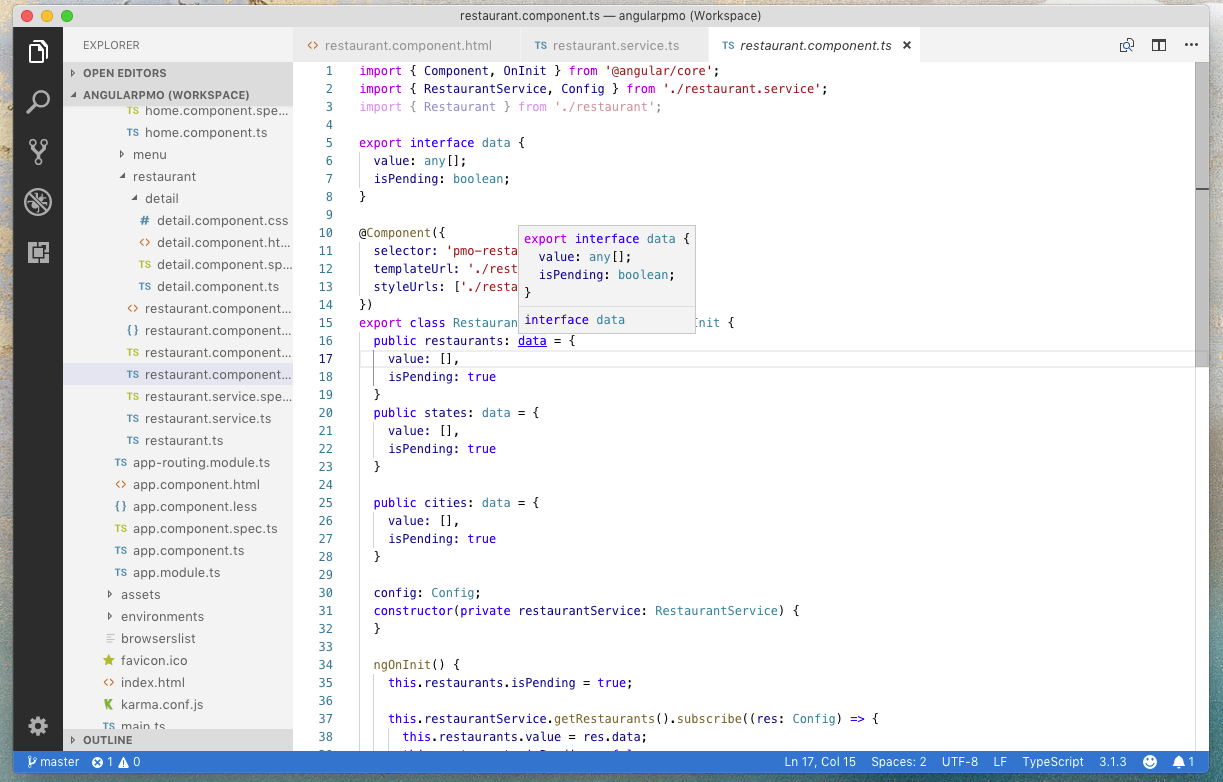 Atom is another good modern IDE that easily supports and aids in TypeScript development with the installation of the atom-typeScript plugin. 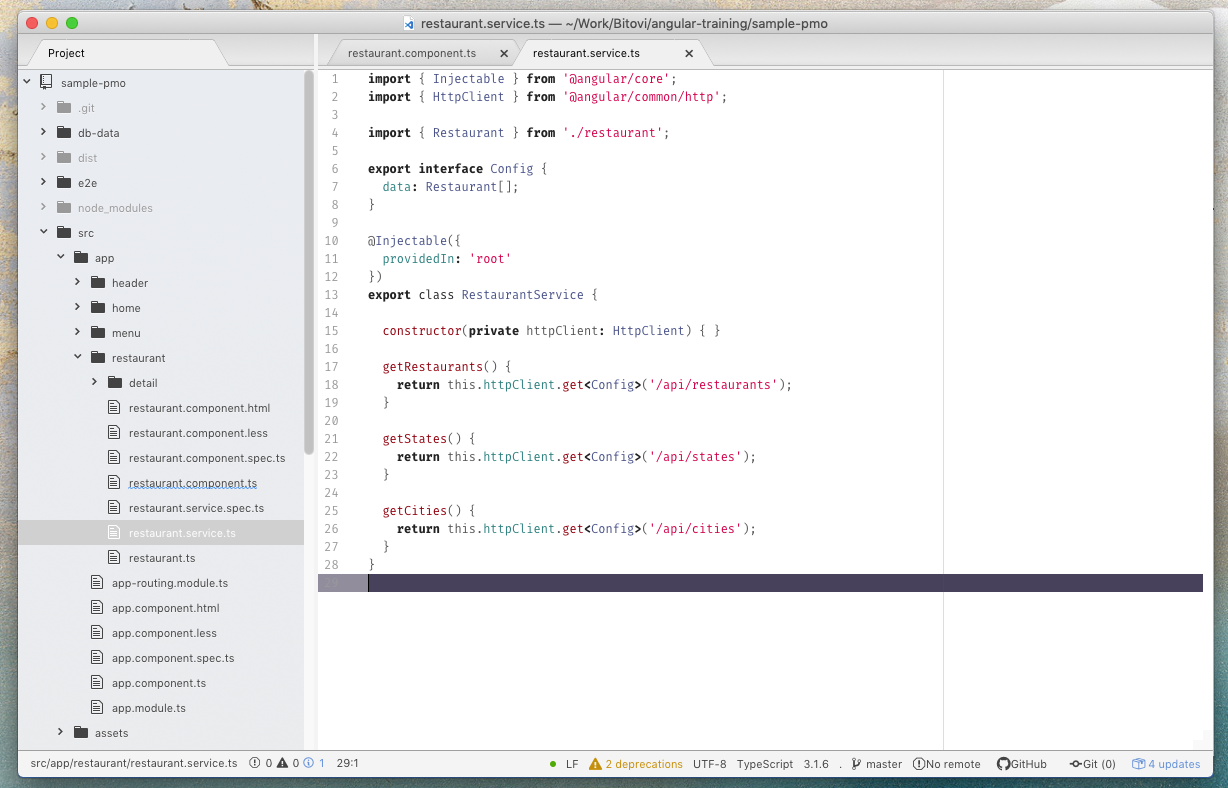 Webstorm is a platform by JetBrains that is loved for its great code refactoring assistance and version control integration, but it does require a paid subscription. 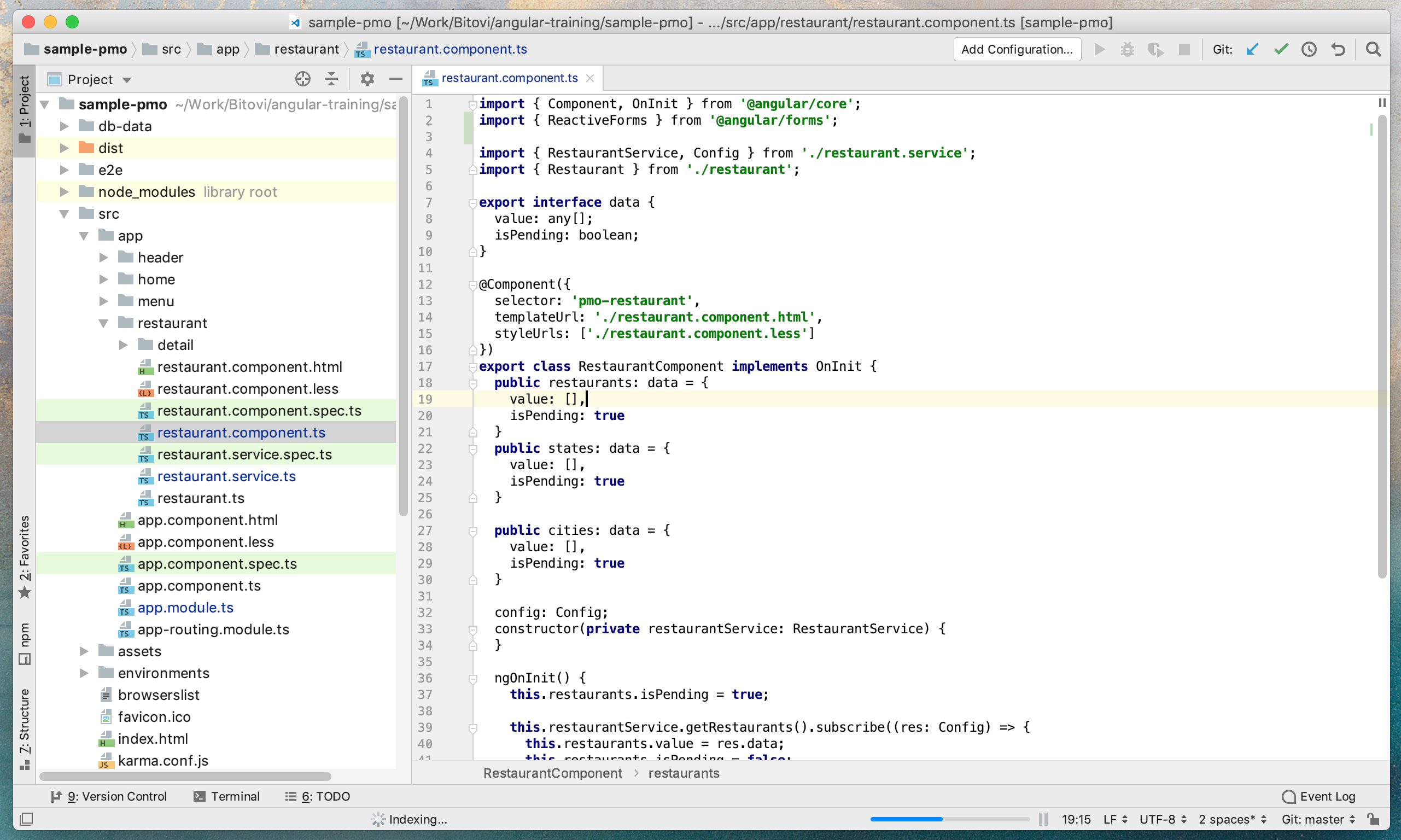 Angular has a command line interface or CLI that does a lot of the initial legwork in setting up a minimal app, as well as letting you easily create and include new components on the fly.

We're going to build a restaurant menu and ordering application. The final result will look like this: 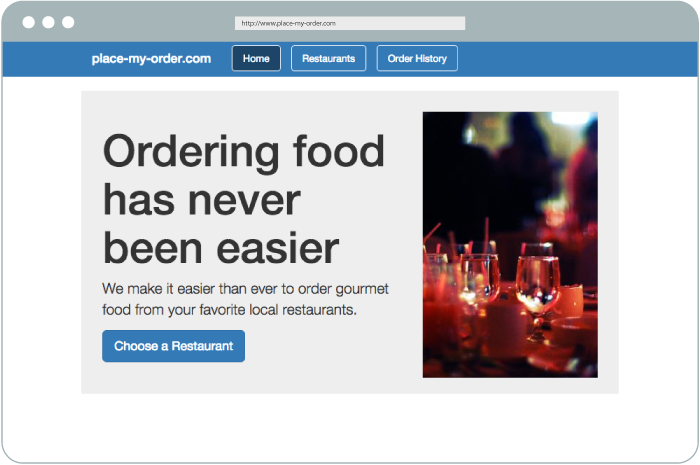 (reminder: You can see a DoneJS implementation of this application at www.place-my-order.com)

This will create a new Angular Workspace, generate an app module, needed config files, and test suite for your new Angular project. You'll be asked a series of set-up questions:

Note that we used the prefix property to set our own default prefix. Angular's default is "app", but a good naming convention is to use a short prefix related to your company or application name to easily differentiate from 3rd party utilities.

There are several more helpful properties that customize how a project is set up:

Directory for all project source files.

Can specify application vs. library

Looking at Our Generated Workspace

Let's walk through some of the files that were generated.

This file is the config schema for an Angular Workspace. By default Angular configures Webpack for it's build process, and uses the angular.json file for the build information.

(Note, prior to Angular v6, this file was .angular-cli.json. When migrating versions, having the wrong workspace config file name is a cause for problems.)

This is the entry point of our application, it compiles and bootstraps our app.

This should feel familiar - our main index page.

This file is the root module for our app. Every Angular app has at least one module that determines how to compile and launch an app. It uses the @NgModule decorator with four properties:

This is our root component, you saw it called in our index.html file as <app-root></app-root>

✏️ Serve the app with:

The start script command value is ng serve which starts a development server on port 4200 by default using webpack-dev-server, and compiles a development version of the app. Any TypeScript errors will be caught by the compiler here, and once ready we can view our app at localhost:4200. ng serve also has live-reload functionality, meaning the browser will automatically reload as changes are saved and compiled.

When we use the CLI to create modules, components, services, etc, it will create spec files for us.

✏️ Run tests in a new command line with:

How to Verify Your Solution is Correct

The change we needed to make for our tests to pass is on the highlighted line 37.

We also included schemas metadata for our module. NO_ERRORS_SCHEMA will keep the compiler from throwing errors when unknown components are included in the tested components. In unit tests we often only want to test the very small piece of code we're work on and don't care about deeply nested components unless we're testing the props in a parent/child component relationship. For our purposes in this training, it's safe to use here.

Let's change the markup to look like the home page of our place my order app.

When you save your changes, you should see the new h1 tag in your browser at localhost:4200.

If you need help with an exercise, please reach out to us on Slack

If you find a bug, please create an issue or email contact@bitovi.com